A little background on geese:  Geese are a federally protected species and are protected under the Migratory Bird Treaty Act as most birds are.  The U.S. Fish & Wildlife Service (USFWS) is the federal agency that oversees migratory birds.  The Ohio Division of Wildlife (ODOW) is the state agency that regulates hunting and manages nuisance goose complaints in Ohio.  Outside of the hunting season, March 11-August 31, ODOW can issue nuisance goose permits to landowners who are experiencing goose issues.  However, before we issue these permits we must see that landowners are doing some sort of harassment to help alleviate their issues.

Activity of geese: Throughout the months of January through March geese start pairing up and returning to their nesting territories.  Of course this is all weather dependent.  If we have a mild winter like we had earlier this year, geese will pair up and return to their nesting spots earlier than normal.  If we have a rough winter, they usually won’t show up in pairs until later or whenever the water is open.  If an aerator is installed on the pond, I recommend turning it off during the winter months to allow freeze up.  I know you said the one on the pond behind the club house gets turned off during the winter.  When you start noticing pairs of geese (2 geese hanging out together, wandering away from other geese, usually in that Jan.-March time) this is when chasing geese off is important.  You really want to focus on those pairs of geese that are looking for a spot to nest.  If they nested there this spring, they will nest there again next spring.  You also want to prevent new pairs from nesting there.

Different harassment tools that can be effective (you don’t have to use these methods.  They are simply my suggestions):

The key with harassment is to not use the same tactic all of the time, and don’t harass the geese at the same time every day.  Try to change it up.  If you do the same thing every day at the same time, the geese become used to it.  Use multiple tactics and be persistent.

Nuisance Goose Permits that can be issued from the Ohio Division of Wildlife:  Outside of the hunting season, there are 3 nuisance goose permits we can issue throughout the March 11-August 31 timeframe: Egg Destruction, Roundup (physical removal of geese, all geese euthanized), and Shooting.  We are pretty strict with issuing the roundup permit and shooting permits.  These permits should be used as a last resort.  There is no cost for the permits through us.  Our permits are issued online.  You must file a complaint first, which you did for this year.  However, you will need to file another complaint at the beginning of 2020 or once the pairs of geese show up. 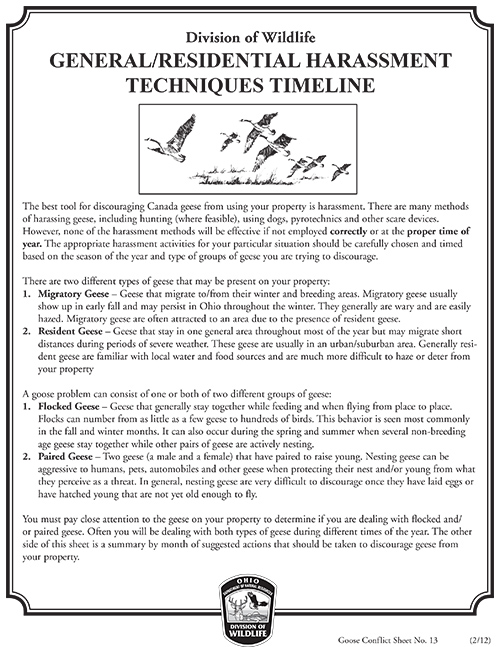 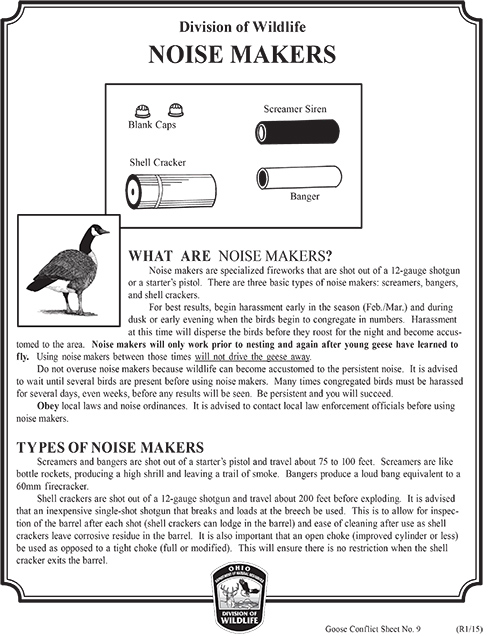 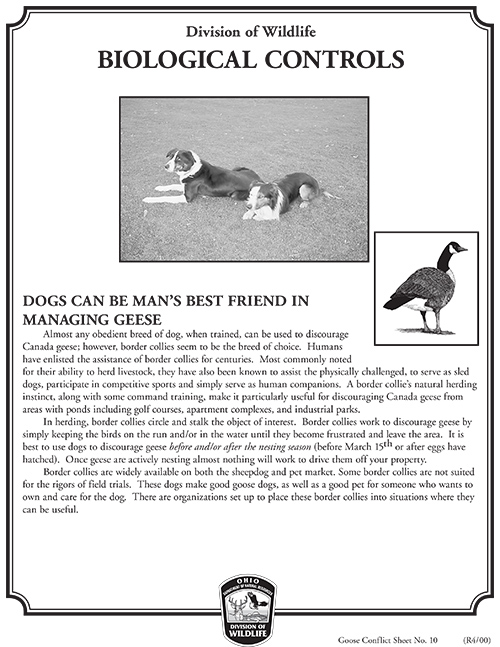